Lately I've found myself particularly interested in the processes by which new ideas are developed. The "Like X for Y" process is one of my particular favorites. It's a a methodology that instigates new ideas by creating unexpected combinations.  More specifically, it is the application of a business, product, or service model applied to a different domain or purpose. If you've read The Nature of Technology (W. Brian Arthur) or Thinkertoys (Michalko), you'll know re-purposing is an incredibly powerful technique for developing innovative solutions.
X = Groupon
Consider Groupon's business model. If you're not familiar with Groupon, it's a one-deal-per-day site that utilizes a mechanism from game theory called an "assurance contract". In english, they offer a daily deal, but the deal does not become a reality until a certain number of people sign up for it.
Now how can we apply Groupon to another domain? Consider the fact that company that's offering the deal essentially says "It's not worth it for me to offer this deal to one customer because I don't make enough on the sale, but it is worth it for me if a large number of customers take the deal because of the high quantity of small profits (and the positive exposure that comes from it)."
Y = Niche Product Design
I don't think it's a coincidence that Groupon deals tend to come from restaurants or service providers, such as spas. I assume it just isn't economically feasible to offer incredibly low price-points on tangible products. However, what if you just focused on the buying power of the assurance contract model and applied that to the purchasing of custom products. If I want a translucent snowboard at a specific custom size with a particular graphic set designed by a specific local designer, I may not be able to get it as it may be too much of a niche product for snowboard manufacturers to build a market around. Or, perhaps I could get it custom- made, but it would be far too expensive to do so.

In steps the Groupon model.. What if I could socialize my niche product idea and build a tiny market of people who also want one. At what point is it worth it for us and for Burton? 10 people? 40? 200? I'm sure every market, product, and manufacturer has their tipping point where it's beneficial for both the producer and the consumer, but this space is worth exploring as "mini markets" could enable people to get their own custom products without the traditionally exorbitant costs. Plus, from a manufacturer's perspective, this is a nice little market research mechanism. Personally, as a product designer, I love this idea as a platform for showcasing and "selling" (designers would have to make commission) their designs. Now where's my custom-designed translucent snowboard!!?!?

by the way, if you're interested in clear snowboards, check out what Makboard has brewing:
http://www.makboard.com/products.php

Challenge: How do you utilize existing technology to enhance the life of someone who is visually impaired?

Solution: This challenge dates back to this past January while studying System Architecture under Ed Crawley, Professor of Aeronautics and Astronautics at MIT. I'll be back in Prof Crawley's classroom come this September, so this idea came back to me today. Put in simplest terms, Prof Crawley's methodologies involve the analysis and design of the overall structure, key components, and interaction between the components of a system. Systems can be anything from a pencil to an aircraft, or better yet, an organization of people.

In the process of breaking down a system, you begin to think about the function and meaning of each individual component, which a fascinating exercise that forces you to contemplate the overall purpose of a product. For example, is the purpose of a digital camera to create digital images or it to capture a scene? If it's the former, then digital cameras have likely reached their dominant design and the impact that a designer/architect can have is minimal. However, if you consider the latter "scene capture" purpose, the possibilities for innovation are expanded...which brings us to the proposed challenge of enhancing the life of the visually impaired. Imagine if you disassembled a digital camera into all its functional pieces and parts. One could imagine analyzing each individual component to determine its purpose and importance relative to the overall function of the camera. As you work your way through the components, consider the visual display that is present on the rear of most cameras. Clearly this feature is useful to give the user a preview of the captured image, but it's certainly not required as a camera is still able to capture a scene and produce a digital image without it. So, we have an opportunity here....

What if the display was not visual, but it was audible instead? Given today's image recognition technologies (Google, Apple, HP) and the endless supply of user-generated content (Yelp, Flickr), it's reasonable to believe that a device could capture a scene, analyze it for recognizable objects, and then dictate a description of that scene using simple text-to-speech capabilities.

The resulting experience would be one where a visually impaired person may have a richer understanding of the world around them. The audible (or potentially Braille-based) output would provide the user with the ability to build an accurate mental depiction without the need for assistance from another person.
Posted by Unknown at 7:56 PM 1 comment:

Idea #2: You Better Listen to Me

Problem:
People often listen to music when they run to enjoy the relaxing effect it can have. As an alternative, they may also enjoy the social experience when running with someone else. Unfortunately, going for a run with someone else without music on often amounts to you running behind (or in front) of them just listening to yourself breath, which can really diminish the quality or effectiveness of the run. 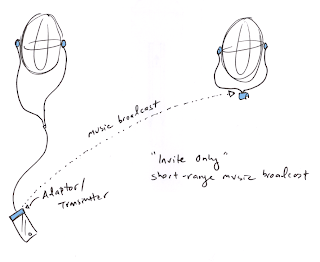 Consider a small broadcasting adapter for an iPod - essentially the existing iTrip works as a good model. One person would attach that their player while another person wears headphones hooked to a tiny receiver (instead of a music player). The result would be a shared listening experience that could enhance the social exercising experience. Clearly, this could be used in a range of situations, and for that matter, may already exist, but I like the concept nonetheless.
Posted by Unknown at 5:56 PM No comments:

Problem:
A great deal of today's technologies claim to enable a more social experience, but they're often just providing a distinct social experience that is disconnected from the real world. How do we design better technology that bridges the gap between the digital and physical worlds? Imagine if you had a wristband that features a very soft, white, low-power LED that pulsed to the beat of a heart. Except, it's not your heartbeat. It's the heartbeat of a spouse or loved one, a friend, or perhaps someone else who you care for. Meanwhile, that person wears the band that's displaying your pulse as well. The result is a unique experience that brings that person closer to you in your mind. Mothers keep their children "with them" wherever they go, spouses keep each other close while traveling on business, high school couples wear them as a sign of affection, friends run an app on their tablet to see when their friends are awake at night. With today's technology, the connection may have to be made using bluetooth and a phone in the pocket, but eventually, the bands will be able to make a direct connection.
Posted by Unknown at 8:50 PM No comments:

"To have a great idea, have a lot of them" -Thomas Edison

My name is Todd Reily and I'm the creator of the TReil & Error project. I'm a User Experience Designer and Human Factors Engineer working in the public sector. I'm also earning a Masters from MIT's System Design & Management program. This project is associated with MudLab, a collaborative innovation group based in the SDM program.

The idea for this project came to me when I realized that my absolute passion is for understanding the problems that people have and conceptualizing new solutions for them. For me, it's more than just throwing out random ideas, but maturing them to a point where can be considered feasible form a business and technology standpoint. As part of the TReil & Error project, I'm going to post new product and service concepts every week, complete with the problem, description of the solution, and concept sketches

Quite simply, my goal here is to solve problems. Since I was a kid, running a magazine and building a mini baseball stadium, I've realized that I never get a greater satisfaction than turning a great idea into a tangible reality. If TReil & Error results in a thousand terrible ideas and one great solution that I turn into a reality... well that's completely fine with me. The point here is about playing the numbers game in search of truly innovative ideas. If nothing else, it's good practice for me as a product designer.

One last important note: One of my motivations for this project is to find people to team up to create new products and businesses. I invite your feedback, positive or negative, in the comments section. If you want to contribute or team up on an idea, please comment or write me at toddreily@gmail.com.
Posted by Unknown at 1:19 PM No comments: