As I've continued my examination of the ideation process this semester, I have become increasingly convinced of the benefit of graphical depictions of complex systems such as this. My most recent work has been done in collaboration with Matt Harper, an MIT System Design & Management fellow who is equally as interested in the product design/innovation process. The following is our in-progress storyboard for our course in System Visualization. The final output will be a more polished and animated version, similar to the RSA Animation series. http://www.thersa.org/. This is very much a draft so please fire away with ideas for improvement.

The Story
Here you are, taking your daily two mile walk from work to the train station. Today’s like any other day…  that is until a cool wind picks up and a dark sky forms over your head and it begins to rain…really rain. Of course, you forgot your umbrella and are not even wearing a decent raincoat. You continue to walk, thinking about your lousy, soaked situation… 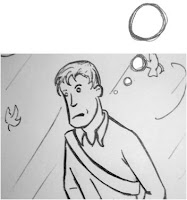 Then, it dawns on you What if there was an application for your phone that monitored the weather, recognized that you were walking, identified your contacts that were driving nearby, and notified them of your situation.

Your kind friends could excitedly rush to your rescue with one lucky companion getting the honor of scooping you up in their warm, day, coffee-ready sedan.  Like that, an idea is formed. Nothing real or tangible was actually created of course, but a notion of a possibility was conceived. 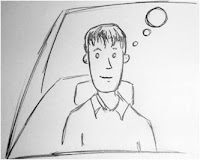 Circumstances Cause Intent
So where did that idea come from? It certainly didn’t fall from the sky with the rain…or did it?  The unexpected rain combined with your lack of umbrella created a circumstance that served as a catalyst for an idea to be formed. You came up with the idea because you wanted to reduce your discomfort in the environment. You wouldn’t have come up with that idea if you strolling comfortably on a sunny day.

Without that circumstance, problem, or challenge, that creative spark may never had existed! That may sound foolish when you consider the “pick your friend up” mobile application, but what if the idea had a much more profound contribution, say to a cure for cancer or source of sustainable energy. The beauty is not in the idea itself, but in the concept that the challenge presented by the environment triggered your problem-solving creativity to produce something novel. Circumstances create intent to form ideas.


Of course, the formation of the idea is not even possible without some form of readiness on the part of idea’s creator. It took you having at least some knowledge of the possibilities of today’s mobile phones. And of course, it took an understanding of the generally accepted ways that we help each other, and how giving a ride to a friend in the rain is a perfectly reasonable gesture. Whatever ideas you come up with are going to be products of your knowledge and experiences. In a sense, the ideas are novel combinations of everything you know, filtered in order to achieve a specific intent.

Readiness Relies on Environment
So the idea has been conceived based upon novel combinations of the information in your head. But where did that knowledge come from? From your environment of course… the experiences you’ve had, the people you’ve known, the books you’ve read, the institutions you’ve attended, and the culture you’ve lived in all play a part in forming your knowledge base and values.
This concept becomes even more powerful when you consider the effect of many people working together to form an idea. After all, if ideas are simply novel combinations, simply adding people will greatly increase the chances of great ideas, right? Well not exactly, but we’ll address that in a minute.

Stepping Back: Ideation as a System 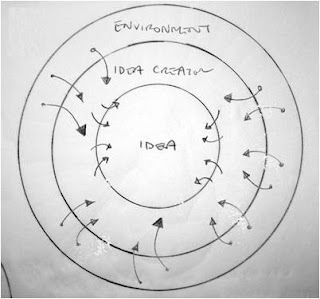 Stepping back from the simple mechanics of a single idea, one could see that this ideation environment is really a system. Each component plays a critical role within it, feeding into each other and contributing to the ever-changing form and overall value of the system. Ideas are how we evolve ourselves and our environment.

Not surprisingly, the Ideation System mimics many of the patterns we see in nature. Ideas, much like seeds, play a fundamental role in the evolution of a society. Ideas are constantly forming and germinating in the environment… some catch on and grow, while others fail to catch on. Much like seeds, an environment needs to foster a high quantity of ideas in order to flourish and evolve.

Much like sunlight and rain for seeds, ideas require proper conditions from which to form… and once they do form, they need the cultivation of a supporting environment and culture in which to grow. 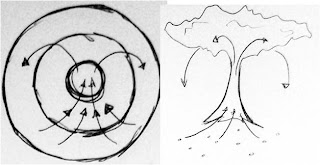 The Tiers of Innovation
Of course, this process of filtering from environment to a ready idea creator to the idea itself is not as simple or mechanical as this model presents it. Culture plays a critical role… the promotion of education, the exploration of new ideas, the questioning of old ones… all require the proper cultural environment. A culture of learning, communication, and experimentation are all fundamental to the formation and realization of great ideas. Let’s take a closer look to see how that culture influences innovation…

Consider an environment where there is a strong culture of communication, idea exploration, experimentation, and acceptance of failure. The environment is dynamic and rich with cross-pollination. People learn from institutions and organizations, develop new theories and innovative thoughts, and in turn, contribute back into society.

In a very evolutionary way, organizations and individuals evolve through the discovery and advancement of knowledge. They are constantly consuming and organizing their new information to fit their values and mental models of the world.  Advancement of organizations and individuals is often done through the production of ideas, pulling knowledge and capabilities from the environment in novel or unexpected ways to address emerging circumstances

Lenses
This may appear all too chaotic and random, and to some extent it is. There is a great deal of forces at play within an open society, from the free sharing of ideas from people to the deliberate intent of organizations and institutions. If one were to examine the flow of information and ideas in a society, they could look at it from a range of perspectives, from cultural influence to structured regulatory effects.

Taking this approach may allow one to even examine the story behind an idea, as it travels from the foundational knowledge and capabilities from the environment that made it possible to the individual or organization that consumed that information to the final idea that was conceived and then added back into the system for potential growth. 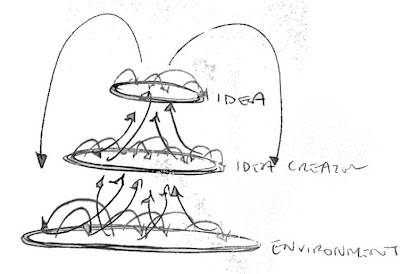 Interested in seeing how the project turned out? here it is..